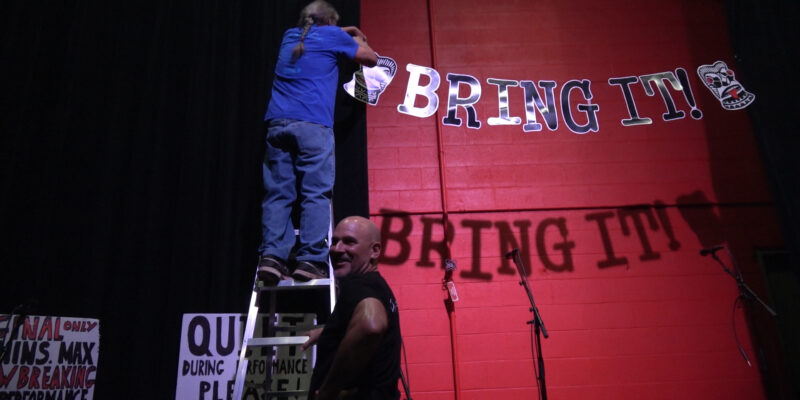 The pandemic brought it to a dormant rest. There are many hopes to revive this energizer of community creatives and support. Keep an eye and ear open for itʻs hopeful return in 2023.

Bring It! Waimea at the Kahilu, Mike Luce theatre. A creative vortex that brought songwriters and community kindness together, sharing birthing new songs and sparking bravery in the creative process. Five minutes a person, before the dancing hands! Open mic  for original songs and spoken word. Yvonne & Keoki with Diesal on cajon. Dreamers, doers and songsters, Roslin and Steph hands on with Scotty on mics and all things sound and support, so many others, too! So fun to be a part of this community. And thanks to the rest of the volunteer hui for this historic era. 2017

A new song about hard times…still yet…got to kiss the sky in gratitude for life. Recorded and released four years later. Open mic for original songs and spoken word only…total community fun! December 2016. Check out the December 2020 recorded version that matured to move out into the world on the Auē Noho‘i album.

Merchant and Richards. A music video by Yvonne.

Auē Noho‘i. A songwriters commentary on “nuff already—how did we get here?”
A videographers call for compassion because this can happen to most anyone.

Scenes at Merchant & Richards Streets in Honolulu sparked the writing of this song. “Merchant And Richards: You Can Park Here, Sheʻs Not A Meter Maid,” Is a multimedia collaborative work by Yvonne Yarber Carter and Keoki Apokolani Carter expressing feelings about changes in downtown Honolulu, a microcosm of change through the last two centuries in Hawaii. Richards Street runs mauka, near Iolani Palace to makai, near Aloha Tower. “Recent visits to O‘ahu, the island of our birth, stirred powerful emotions, images and concern—feelings of loss, incongruity, compassion, abiding love, rich memories and worry. Worry, that no amount of triage can repair the damage caused by decades of society valuing economic wealth above community and earthʻs wellbeing”. Using imagery, original sounds and music Keoki and Yvonne acknowledge a collective responsibility, and the hope that our hearts are not lost, or gone missing. The original draft video used audio from a live concert and became part of the Hawaii State Arts collection. This remake incorporates our new studio recording. Keoki Apokolani on guitar and vocals. Paul Lindbergh on saxophone. Jon Hawes on acoustic upright bass. Video camera, production and editing: Yvonne Yarber Carter. Keoki was patient enough to not only make the music but try out the video green screen ideas and to keep his scratchy ‘umi‘umi after a long creative boat trip with Ricardo off-grid in Alaska [another blog]. 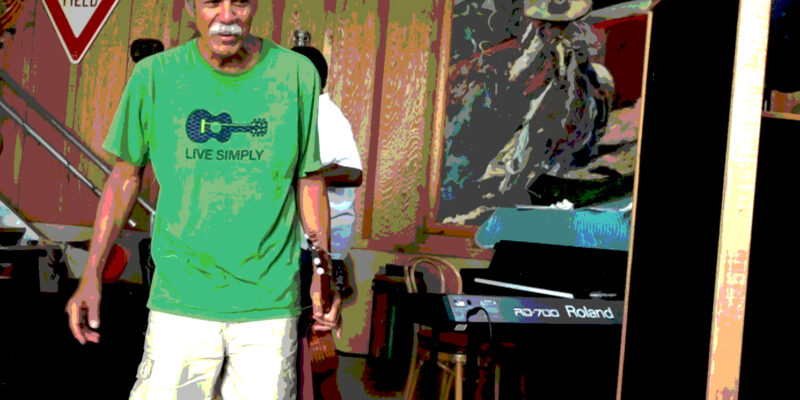 All new story songs borne out of the land and each other. Keoki Apokolani Carter and Yvonne Yarber Carter blend together Hawaiian honua mo‘olelo with world folk storytelling, jazz, blues, and life. Add the many musical flavors of the Maker Braddahs (Elliot and Gregory).

A storm cancelled an outdoor Oahu concert in late August, so impromptu, we caught a plane home and gathered on sunnier Hawaii Island at Kumau Ranch for a live sound experiment. Recorded & Engineered by Lock Lynch Sept 1, 2 & 3, 2018, always ready to conjure up new possibilities. Mahalo to the creative inspiration of place and the nourishing home of Ricardo and Jileen Russell.

Most of all to the mana of ‘āina Kumau—confirming that a seeming disappointment can open unexpected doors of creativity! Album release, December 2022. “Kumau Barn Sessions” Apokolani & the Maker Brothers

New Apokolani storytelling songs birthed. Here is some of the backstory. So much aloha goes out to many— Lock, Elliot, Greg, Chris Chorney, Michaeloha, Ricardo, Jileen, and ‘āina Kohala.

Above. September 1, 2018. Keoki, Greg “bassman” Maker, and Elliot Maker start warming up while Lock experiments with different sound recording configurations. Yvonne captures moments and does all the whatevas.

Above. The process. “Oh So Many Doors” as it morphs and births from a private pule rhythm meditation on Logic by Yvonne to a song. It incubated silently on a laptop for several years when Keoki stumbled upon it and said, “you should share this, I can play that bassline for you.” And so he slacked his guitar and the rest is a collective history. This is the first moments working on it with Greg and Elliot while Keoki plays rhythm slack guitar.

Above. Yayyy! Lock sets up the individual monitoring and gets to know the equipment at hand.

Above. Next steps of session recording setup for first-take of “Oh So Many Doors”. Lock finesses new sound configuration, searching for the right mics and levels.

Above. More, loosen-up, warm-up, on a fun song, “Bartalk On A Napkin”, still yet, not recorded. A mele sparked by a talkstory with Keokiʻs cousin and how she was gifted the money to open a bar in Nanakuli. Of course, Keoki puts his own quirky twists and Yvonne chimes in. Lock still finding the best mics for each person. Studio Kumau offers a wide range of options in addition to ours.

Above. Day Two has a whole new groove happening for real. Long intense hours creating cohesive sounds and rhythms. The magic of jazz and blues is happening and weʻre almost there. Recording “In A Moment Like This”.

Above. Ma‘ona maika‘i. We took a bounty-of-the-land lunch break and Yvonne is documenting as sheʻs done most of her life, trying to capture a variety of moods in the spirit story as we try to shift back to the music. Having fun before another take “In A Moment Like This”, searching for that chickenskin wave that everyone rides together.

Above. We can all feel when after plenty takes—THIS IS THE ONE! Nothing like it. The take “In A Moment Like This”. The exclamations at the end say it all. And ready to move to the next song.

Above. Day Three. Recording “Star Gazing” — a connected hui that has become one. Living together, eating together, being together. A special time with Kumau.

Above. Day Three at the end of recording. Time to take a deep breath, shift and re-group. But before the scramble of re-organizing, packing and planes to catch–donʻt forget photos. Missing Jilleen and Ricardo who are off-ranch—mahalo nui again. And, mahalo Shawn for a wonderful bass.

Back at the Analog Rock Studio

Part two. Lock Mixing, Engineering in his studio and Editing with Keoki and Yvonne.
Chinatown was old stomping grounds as small kids when still a “Territory”…such rich memories.
Plenty, plenty music And then the late 60s and 70s explosion.
The awesome mele aunties on their upright basses, pianos, strings and honey voices.
Homecooked ono-kine food for the kind and generous customers.
And then a couple doors down the Glades, and further; Territorial Tavern and bugaBuga, Tremaine, and on and on.
Downtown, still a vortex of grassroots, untamed, Energized trailblazing Creatives.
Each cycle ampliyfing the next.

Above. November 2019 at Analog Rock Studio–Lock & Chris Chorneyʻs in Chinatown. Yvonne has imagined a cello on this song for years. This was the moment, late at night, after Chorney and two others finished a couple hours of experimental improv. Glad Keoki and I were in Honolulu for dear Pua and “Cowboyʻs” wedding. The wonders of longtime friends must have energized healing and some surprizing studio time for vocal tracks, cello and Barn Session editing with Lock.

Ka‘ea: “I like to call the music you created together or individually, “Conscious Music”.
Has that always been a part of your creative process? Because thereʻs always a message “or something you can take away from not only the lyrics, but the movement of the music.
Jaz: Itʻs also partial folk music in a way, if you go back to the old albums of the liner notes like Sons Of Hawaii, the Americans were calling it “folk music” as storytelling…and your music is very much that style…Your ukelele style is very much that Peter Moon, Ohta San—simple but very classy, clean playing. Not that [vocalizing] bludahdaadaadaadaa all over the place kine—which fits the storytelling. It doesnʻt distract from the storytelling.ʻ

Some Highlights:
Begin: Aloha and about new CD Aūe Noho‘i: Pili ‘Āina Kahi
5:36 Jaz & Kaea:How were you inspired. [Y] The energy for the music comes from outside ourselves
7:10 KC:…people ask…what comes first? but when both come at the same time…thatʻs the most powerful kind…theyʻre gifts
8:23 Jaz: Sometimes that kind comes as an odd time like in the car or not at home…do you use technology when that happens?
9:26 Kaea: I like to call the music you created together of individually, “Conscious Music”. Has that always been a part of your creative process? Because thereʻs always a message “or something you can take away from not only the lyrics, but the movement of the music.
10:53 Jaz: Itʻs also partial folk music in a way, if you go back to the old albums of the liner notes like Sons Of Hawaii, the Americans were calling it “folk music” as storytelling…and your music is very much that style…Your ukelele style is very much that Peter Moon, Ohta San—simple but very classy, clean playing. Not that [vocalizing] bludahdaadaadaadaa all over the place kine—which fits the storytelling. It doesnʻt distract from the storytelling.
11:48 KC : I guess itʻs all a melting pot of how we grew up. Go down da beach wit a six-pack of beer…Primo, or Gold Label back then…[plenty laughing] Then you could have campfire and da bradahs would come down with the ukulele and oh ʻwhatʻs this song? whatʻs that song? You donʻt know chords, you donʻt know whatever, you just find sounds and play the music. And Pops [KCs father Ula or Red], I learned kihoalu from watching him. He would slack the guitar and make sounds.
12:22 KC: My older brother, bless his heart, heʻs been gone now…but I can remember my hanabuttah days, he would get together with his friends and on the ukulele they used to play Jobim-kine songs, he was really into Brazilian jazz and this kine energy—whatever you want to call it–- comes about [creating new songs ] I always tell Aunty , oh this must be my braddah when I used to watch him, because that kinda jazz influence came from him. Cause he was playing that kind in the early 60s and Iʻm small kid watching, what he doing? What he doing?
13:53 Kaea: …you folks have chosen a handful of musicians accentuating the mood, the intention, and you can hear the music. Like Jaz was saying you can hear, the sax. Where the instrumentation is placed, youʻre actually allowed to enjoy it. Like when we were small, my mother would put on Brothers Cazimero and we would clean house to. This CD, [Aūe Noho‘i] you can put on and listen to all day long. Because it has this really calming groovy energy to it. So it just fills the house with such goodness
15:07 YYC: He leaves plenty space—the space between the notes is just as important at the sounds.
Kaea: That makes sense! Itʻs like my body understands…because itʻs not being confused about what itʻs hearing. That makes sense to me. Space.
KC: When I hear music that every space is filled up…I cannot listen to it. I cannot hear it…guess Iʻve always been that way. I donʻt know if itʻs growing up with Hawaiian-kine music, kī hī alu, listening to Pops, listening to uncles at lūʻau playing their music, it was all those influences.